In 1940, the French Air Forces, the Armée de l'Air and the Aéronautique Navale, were formidable forces, at least on paper. However, the French Air Forces were lacking in doctrine, command, logistics, control and communications. The aircraft had low serviceability, and in general could not meet the performance of British or German types. There was also a shortage of trained pilots, and although many French pilots fought tenaciously, they could not stop the onslaught of the Luftwaffe.

French strategic bombing had had its supporters during the inter-war years, most notably Pierre Cot (1895-1977), who was Air Minister between June 1936 and January 1938. Cot was close to the Communists and was eventually accused of being a Soviet spy, but he saw the rise of the Third Reich as a real threat. The bomber force was tripled by adding five new bomber escadres, converting seven of the twelve observation and reconnaissance escadres to bomber escadres, and equipping four of the five remaining reconnaissance escadres with aircraft capable of long-range bombing. However, by 1940 most of the French bombers were obsolete, and they were squandered as a result of deficient doctrine and tactics, most notably flying bombing missions without fighter escort.

The only long-range bomber available for the French in 1940 was the Farman F.222, a rather ungainly four-engine aircraft dating back to the mid-1930s and the much more modern Lioré & Olivier 451. The latter was however only available in limited numbers. The Aéronautique Navale was also in possession of three Farman 223.4, former postal aircraft that had been requisitioned by the Navy and given the names Camille Flammarion, Le Verrier, and Jules Verne. These were fairly big aircraft, slightly larger than a Lancaster or a Boeing B-17. The Jules Verne, formerly F-ARIN, was assigned to  Lieutenant Commander (Capitaine de Corvette) Henri "the Pasha" Daillière (1901-1942) in April 1940 and crewed by experienced naval aviators: flight engineer Corneillet, navigator Comet (who had crossed the Atlantic before the war), pilot Yonnet, radioman Scour and bombardier Deschamps. 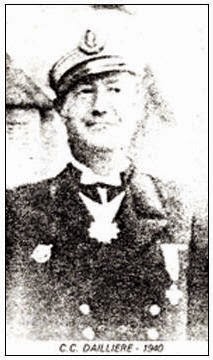 Daillière oversaw a series of modifications to the aircraft at the Toussus-le-Noble airfield, which included the installment of a 7.5 mm Darne machine gun in the right rear access door, eight Alkan bomb shackles under the aircraft, a bomb sight, extra fuel tanks as well as an autopilot. Tricolores were also added.

Lieutenant Commander Daillière very much wanted to use the Jules Verne for strategic bombing, and on May 13 he started off his remarkable career by bombing the marshalling yard at Aachen. However, the aluminum aircraft was found to reflect the searchlights, so the Jules Verne was painted flat black. Over the next couple of days Daillière and his crew successfully attacked several bridges and levees in the Netherlands in vain attempts to stem the German  advance. The aircraft also attacked a German convoy on its way to Dunkirk on May 26, causing significant damage to the German units. It also escorted the cruiser Emilé Bertin with a significant portion of the French gold reserves to Martinique before returning to the campaign in France. 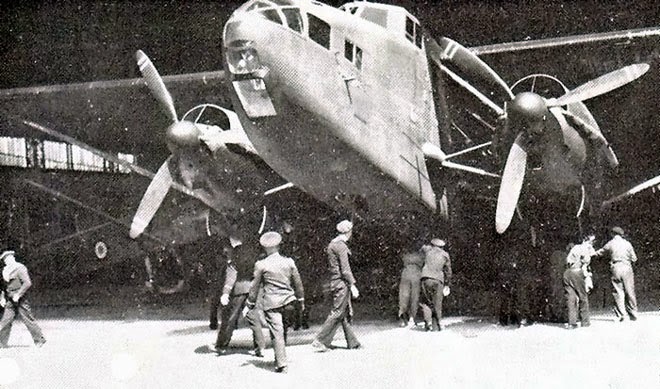 On Monday, June 3, a German force of some 300 bombers attacked Paris causing several hundred casualties. The French decided to retaliate, and although they didn't have a comparable number of bombers, a psychological blow to the enemy was deemed necessary. Daillière was given the mission to be the first aviator to attack Berlin with ordnance. He planned to take advantage of the Farman's considerable range and fly around the Western Front to attack Berlin. The Jules Verne took off from the Merignac airfield near Bordeaux on June 7, 1940. The crew proceeded over Normandy, the English Channel, where they were promptly targeted by the anti-aircraft defenses of friendly ships, the North Sea, and over Denmark, where they encountered more Flak over the island of Sylt. The aircraft was not hit, and it flew in over the Baltic Sea before turning south and heading straight for Berlin at high altitude. 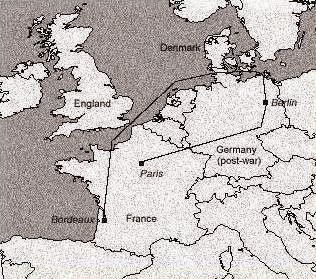 On board the Jules Verne, the crew became increasingly tense. The pilot, Yonnet, wrote that "like former corsairs, we are facing the enemy alone...like Robert Surcouf, we must strike first, very hard if possible, to have a chance to escape before the enemy could regain his mind". The Jules Verne reached Berlin just around midnight. Daillière described the approach to Berlin: "I got ready to release the bombs and realized that someone had failed to install our bombsight, so I pressed my nose to the glass of the cockpit." The Berlin area was covered by clouds, and therefore difficult to find, but all of a sudden Daillière spotted the lights of the Tempelhof airfield, and he ordered an approach before accelerating away at low altitude from the airfield.

Daillière flew on over Berlin, still at low altitude and unsynching the engines to vary the engine noise for some time in an attempt to create the impression of a proper formation of bomber aircraft. Eventually eight 75 kg bombs were dropped in two runs over what he assumed was a factory complex in the northern parts of the city as Flak started firing and search lights were turned on. A further 80 incendiaries were dropped by hand by Deschamps and Corneillet  and two or three clips of machine gun ammunition were spent in an attempt to hit the search lights. Flight engineer Corneillet finished the raid by throwing out his shoes at the capitol of the Third Reich.

The return led was less eventful, and they reached Chartres after eleven hours and 40 minutes in the air. The Jules Verne narrowly avoided being hit by a German air raid on Chartres just after taking off to head on to Orly, and after refuelling, back to the base at Merignac, where they landed after 13 hours and 40 minutes and around 3,000 miles in all. As the crew sat down for a well-deserved meal, the pilot, Yonnet, noticed Corneillet's bare feet. The flight engineer simply commented: "You know, they did not win anything. These shoes were almost worn out". 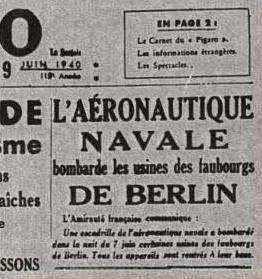 The raid was much praised in French media, and it was claimed both that the mission was accomplished by a formation of bombers and that there were no losses, which of course happened to be true. The French crew was accused by the Germans of being "pirates" and condemned to death lest they flew over Germany again. Daillière claimed that they were "privateers" and not pirates, and they raided an aircraft factory in Rostock three days later.

The Jules Verne continued its career against Italy once Mussolini declared war on France on June 10. The aircraft attacked the Marghera industrial center near Venice and it dropped thousands of propaganda leaflets over Rome. The Jules Verne completed 17 missions against German and Italian targets before the armistice. Following the Fall of France, the Jules Verne was hidden in a hangar, where it was purposefully set on fire in 1942 to avoid having the Germans find the aircraft.

Lt. Col. (Ret.) Faris T. Kirkland. The French Air Force in 1940. Was it Defeated by the Luftwaffe or by Politics? http://www.airpower.maxwell.af.mil/airchronicles/aureview/1985/sep-oct/kirkland.html